Another Fate of Fugitives from Norway: from Swedish Asylum to the Czechoslovak Army

Refugees from forced deployment had to submit to military conscription if they were interested in the help of Czechoslovak officials. It was not just an administrative formality, as over time a way was found to transport the recruited volunteers to Great Britain, where Czechoslovak military units operated.

Sweden, as a neutral country, maintained sporadic air links with the free world throughout the war. Of course, only to the extent that both warring parties were willing to tolerate. Thus, soldiers, members of the secret services, couriers and merchants competed for rare tickets. Nevertheless, this way managed to get to Britain about a hundred volunteers for service in the Czechoslovak army.

Among all 95 Czechoslovak volunteers documented so far, transported by air from Sweden to Britain during the war, 25 persons registered in the Organisation Todt file in Norway were documented.

The first five arrived in Britain in October and November 1944. After the necessary administrative actions, they were all enlisted in the Czechoslovak army. They underwent basic training, followed by assignment to specific units. Two of them, Jan Jansa and Mojmír Genzer, were selected for service with ground personnel of the Air Force at the very beginning of January 1945, the other three reached the Czechoslovak Republic in the spring of 1945. a separate armored brigade (ČSOB), which besieged the besieged German garrison of the port of Dunkirk on the shores of the English Channel. The remaining 19 "Norwegians" arrived from Sweden to Britain at the end of April and during May 1945 - too late to catch up with the combat deployment.

After the war, the "Norwegians" in the ranks of their troops gradually returned to their homeland, where most of them were released into civilian life by the end of 1945.

List of Czechoslovaks from forced labor in Norway who was deployed to Czechoslovak army in Britain. Photo: Václav Bayer with other volunteers during training in England at the Replacement Body in Southend-on-Sea (archive Chronicle of the City of Bernartice nad Odrou)

Other materials and resources:

Noraci.cz website: “Jan Jansa from his deployment in Norway to Czechoslovakia. Army in Britain ”July 26, 2020 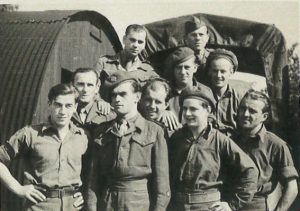