"As children, we thought dad was on vacation in Norway. We knew nothing."

Mr. Rostislav Holub did not tell his family much about Norway. His daughter, Mrs. Milada S., from Pivín in the Prostějov region recalls: “As children, we knew that he was in Norway. We even bragged about it, but we thought he was there on vacation. We didn't really know anything. "He adds:" When it came to Norway, Dad always changed the subject. Only after he suffered a stroke did he occasionally shout something, even shout "bride him". In Norway, he had to experience something with the Russians. His memories came back to him, out of nowhere he sometimes flew out of bed, cried and called, "I want to go home."

For him, his stay in Norway was a trauma that no one should have learned about. The daughter adds: “Dad was a very good person. He didn't want us to know about the horrors of war and to burden ourselves with that. "

Rostislav Holub was born on Skalka in 1923 into a working-class family with two children. He went to a municipal school and trained as a carpenter in Prostějov with Ing. J. Nedělník. He received an apprenticeship certificate in March 1942 and was called to work in Norway in November of that year. He was assigned to Herman Schaffer in Narvik. From there, in mid-1943, he was transferred to the Arge Theo company to work in Trondenes to build a fortification at the Theo artillery battery.

In 1943 he got home on vacation. He did not want to return, but was reportedly imprisoned for about three months in Ruzyně Prison, and then sent back to Norway.

He was repatriated to his homeland on September 2, 1945. When he returned from Norway, his birth house was destroyed because a front led there at the end of the war. The family was forced to move elsewhere.

Upon his return, he began military service in Slovakia. Then he worked for the builder engineer Josef Nedělník in Prostějov. In 1950, he married Jiřina Laštůvková and they had three children, Rostislav, Milada and Alena. From 1948 he worked as a carpenter, later as a construction manager in Czechoslovakia. construction plants in Prostějov, until retirement.

He liked going to nature, fishing and loving mushroom picking. He was happy in the woods.

In Norway, he had to say goodbye to his Norwegian girlfriend. When she wanted to go to Czechoslovakia with him, he decided to end the relationship. As his daughter recalls, "He said he couldn't imagine her at Hana in a field of beets." He adds that his friend from the deployment contacted a Norwegian daughter in the 1990s who sought him out.

Ms. Milada goes on to say that her father developed strong ties with Soviet soldiers in Norway. "No one has suffered as much in Norway as the Russians. At the end of the war, no one cared about the Czechoslovaks, and according to his memories, only the Russians helped them secure the return of ships home. This experience shaped him in the future, and even later, for example, in 1968, he would not have heard a bad word against them. "

He died in 1995. His descendants live in the Prostějov region.

With the kind permission of the family, we publish a part of Mr. Rostislav Holub's diary here. It describes a departure from his native village, a trip to Berlin, waiting in camps, a cruise across the sea to Oslo and a trip and a several-week stay in Trondheim until the beginning of 1943.

Unfortunately, the story of traveling further north to Narvik and his work outside the Arctic Circle has not been preserved. His mother burned the manuscript in the stove after the war. She did not want him to occupy with war memories any more.

We thank Mrs. Milada for her friendly welcome and hospitality. Many thanks especially for allowing me to share this powerful family story.

We are also grateful for lending the diary for further research and for the opportunity to share it with other interested parties and families. 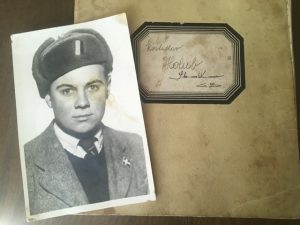 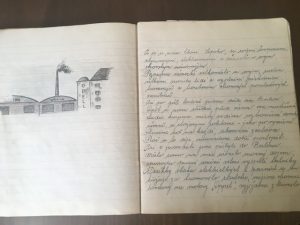 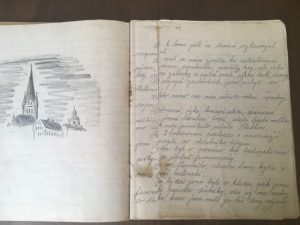 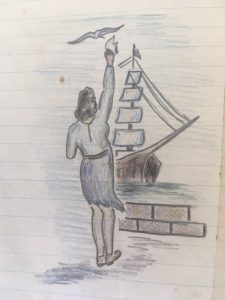