At the end of February 2021, Dr. V. Hingarová visitied grandchildren of Mr. Holub, Eva and Václav, in the village of Luka nad Jihlavou. They talked about their "grandfather" Antonín, who spent the war years in and around Trondheim. Right at the beginning, they boasted two pairs of knitted gloves with a Norwegian pattern, which Antonín brought from Norway and allegedly wore them long after the war.

Through family memories and a dozen photographs, correspondence and official documents preserved, we can reconstruct another story of a Czechoslovak in Trondheim.

The Norwegian story of Antonín Holub began with a call-up order from the Jihlava Labor Office dated November 3, 1942. Three days later, a twenty-three-year-old room painter was sitting on a train to Berlin, where he found out that he and his recruits had been assigned to work in Norway. He left his girlfriend Růženka at home. He send her  postcards and photographs after another two and a half years in Norway.

Mr. Antonín was assigned to work in Trondheim for the painting company Hans Hemmer. In 1943, for several months, he became an auxiliary worker on the construction of the Dora submarine bunker - the largest German submarine base in northern Europe. The work consisted of deepening and strengthening the seabed. Other Czech workers also described hard work and dangerous working conditions.

During 1944, he was sent by Organisation Todt to work around Trondheim and then further north to Mo i Rana. During his stay, he twice got home to the Jihlava region as part of a several-week vacation. He lived to see the end of the war in Norway.

In the family album we find unique pictures, especially from the end of the war. The Germans capitulated in Norway on May 7, 1945, and ten days later, on May 17, a national holiday was celebrated throughout the country. To this day, it is celebrated in each village with a procession with the participation of representatives of public and civic institutions, schoolchildren and especially children, decorated in local costumes with Norwegian flags. As the celebration of the national holiday was banned during the war, the first post-war celebration also became a celebration of the end of the war and freedom. In Trondheim, where Mr. Holub found himself after the liberation, representatives of Allied troops and foreign workers and other people in attendance also took part in the procession. The Czechoslovaks, who at the end of the war may have been around two hundred in Trondheim, carried Czechoslovak flags and a banner with the inscription Czechoslovakia in the procession.

The journey home from Norway after the war was much longer than the arrival itself. It lasted three to four months. Foreign workers were gathered in concentration camps in Norway (the former Strinda labor camp in Trondheim), where they awaited repatriation. It was organized by Czechoslovak repatriation officers who arrived in Norway at the end of May from Great Britain. The Norwegian Red Cross provided accommodation and food for the repatriates, and the liaison officers, in cooperation with the Allied Command, compiled their inventories and organized transports from Norway.

The group that included Mr. Holub left Trondheim on July 3, 1945, after almost two months of waiting. At first, they took a train to Oslo, from where Allied planes transported two hundred Czechoslovaks in groups to Brussels. The American Douglas Dakota plane, flown by Mr. Holub, brought Norwegian prisoners of war from Germany to Oslo, and took the Czechoslovaks on board on the way back. From Brussels, it led a repatriation pilgrimage by truck to France, then trains to Munich, until August 2, 1945, they arrived in Pilsen. Here the returnees received the so-called repatriation cards and each then individually took the train to their place of residence.

The series of images from the "air" repatriation, which has been preserved in the estate of Mr. Antonín Holub in Lukach in the Jihlava region, is absolutely unique.

I also record the story in the family memory that the flight of Czechoslovaks to Brussels allegedly helped negotiate an American captain of Czech origin, who wanted to help his compatriots. For Mr. Holub it was the first in his life and according to his grandchildren also the only flight by plane.

Let us add that most Czechoslovaks were repatriated a month later, by mass transport on a German ship from Oslo to Bremen. From there, they traveled by train throughout Germany, and returned to their homeland at the turn of August and September 1945.

We thank Mr. Holub's family for the friendly reception and provision of materials for further research.

In conclusion, it is worth adding that we got to the estate of Mr. Holub thanks to the initiative of Mrs. Jarmila K., daughter of J. Lébel, who was also deployed in Trondheim. She found 28 addresses in her father's notes. She wrote to her friends in January 2021, and Mr. Holub's family was one of several who responded to her call.

At the end of September, we received several photos from Jan Novotný's relatives. It is a memorial album, which this forced labourer established after his return to his homeland. The images come from the vicinity of Mosjøen, from the Mo i Rana area in central Norway. This place was strategically important especially in terms of the construction of the Polarjernbanen polar railway, however, specifically Jan Novotný and his working group were sent on a "shift" especially to the local forests and the port. The album contains both joint pictures and profile pictures of individual friends of Jan Novotný, as well as photographs of the surrounding nature. Many thanks for lending this unique materials go to family.

(From the private archive of Jan Novotný's relatives)

The daughter of Josef Lébl from Prague-West keeps her father's suitcase from the war in the attic of the family house. It is full of memories from Norway. It contains postcards, books, maps, diaries and letters from home, even a birthday telegram from his Norwegian friends addressed to a camp in Hemne near Trondheim. An incredible treasure! Unique materials provide a unique look at everyday life, the joy and sorrow of forced labor in Norway. Many thanks from our hearts to Mrs Jarmila, Josef Lébl's daughter, for providing us with materials for further research! 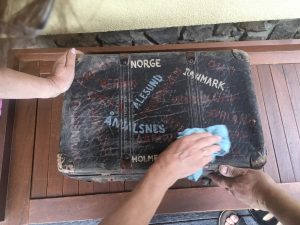 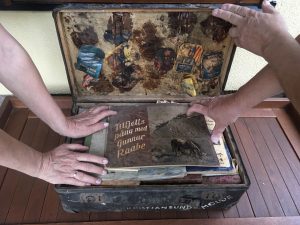 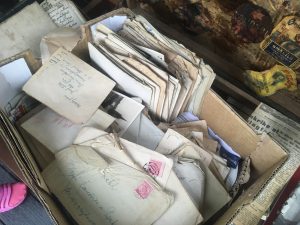 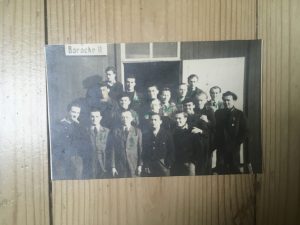 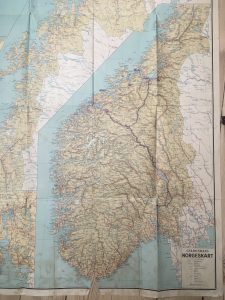