Since mid-September, the Czech team has been on a business trip in Trondheim, Norway. Together with their Norwegian colleagues, they set out to find the places where the Czechs were forced to live and work.

During the war, the Trondheim labor camp was used to house up to 5,000 foreign workers from occupied European countries. It was located near the town in the district of Strinda. The camp had the same name and was divided into 12 smaller barracks camps. Over one thousand five hundred Czech workers passed through this place (especially the transfer camp No. 12, the so-called Durchganglager).

Today, Strinda is one of the districts of Trondheim and is called Strindheim. There are practically no visible signs of the wooden labor camp. Only residential houses of German soldiers have been preserved. The area has been completely converted into a residential area in recent decades.

We were accompanied to the place of the former Strinda camp by Norwegian colleagues, historians prof. Hans Otto Frøland and dr. Gunnar D. Hatlehol from the local NTNU University. 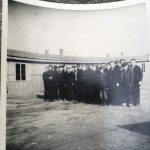 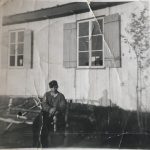 Several hundred Czechs worked in the port of Trondheim on the construction of the submarine dock Dora I. and Dora II. The most physically demanding work took place on the excavation of the submarine bottom, where the workers were lowered in an iron caisson below sea level. The submarine base Dora I. was completed in mid-1943, and then continued at the base Dora II., which, however, remained unfinished. The monumental bases, which had concrete walls up to 3.5 m wide, served the Norwegian Navy after the war. Efforts were made to remove it, but demolition work was not successful for the unbreakable reinforced concrete structure. Part of Dora I. was sold to private operators in the 1960s and part is being used as a city and district archive.

The outer part of the former base is accessible to visitors. In the near future, there are plans to convert part of this port into a modern technological-industrial zone. Discussions are currently taking place between city officials and developers on how the site's war history should be preserved.

For most people in Trondheim, the former German base of Dora is associated with a number of myths. It is said that the bodies of POW are concreted in the foundations.