Letters to Descendants - Request for Materials from Deployment in Norway

During April 2021, we mailed about 180 letters to the descendants deployed. We ask them if we could look into the family estates and look at period photographs and materials from Norway, which many still keep at home after their father or grandfather.

We write to the addresses we found in the archives of the Temporary Secretariats of Norák in Havlíčkův Brod and also to the addresses recorded in the diaries and memorials deployed. It is clear to us that many of them are no longer valid, but we believe that some of the descendants still live at the same address as their father or grandfather before. We focus especially on the age group that uses traditional forms of communication.

We sent out fifty letters in mid-April. We received a response from twelve relatives, while twenty letters returned to Charles University. In the following weeks, we sent out another hundred letters. We will send the last part of the letters at the beginning of May.

We will soon bring samples of materials that come to us.

Thank you to all the families who contacted us by phone or e-mail. 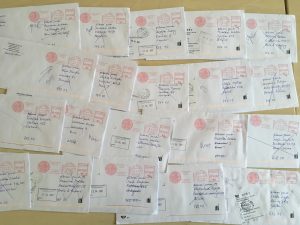