We bring you other medallions deployed in Norway, which were created in the summer months with the help of families and relatives of Noráci. Thank you for your kind cooperation, amazing stories and materials. And also for your patience. We have gathered a lot of inspiring materials in recent months!

Benjamin Šíma (* 1921 - † 1990) was born in Čekanice near Tábor and grew up with his two sisters in a Protestant family. A firm faith in God has accompanied him throughout his life. In October 1942, he was fully deployed to Organisation Todt to work in Norway. In one of his first letters, he wrote: "My final destination is about 1000 km beyond the Arctic Circle. Where I go, there is only aurora borealis, ½ a year of darkness and ½ a year of light… ” In the port town of Skibotn, he worked as a laborer, mine finder, ambulance, helper in the kitchen. Jaroslav Buchtík (* 1920 - † 2010) was born as the next-to-last of 13 children. His parents provided him with an education at the Archbishop's Grammar School in Kroměříž. Then they determined the path of his priestly education at a theological seminary (his two sisters were nuns). The German occupation began and in November 1942 began the occupation of the labor office as well. Jaroslav was designated 250 km behind the Arctic Circle to Harstad - north of Narvik to the construction company Hermann Schaefer. He became a friend with a Norwegian girl called Ingrid Kristoffersen, who later married family Strøm. Jaroslav visited the Strøm family with his wife in 1965. From this visit, he also brought an accordion, which he bought there during the war and which had been waiting for him with the Strøm family for 20 years. His son then learned to play it as a child.

Jiří Mlíka (* 1921 - † 1951) was born in Horní Jelení. Like all born in 1921, he was totally deployed to work in the Reich. On December 7, 1942, he left by transport via Berlin to Szczecin, from where he took the Urundi ship to Oslo. From there by train via Trondheim to the administrative center of Mo i Rana. Here he was assigned together with dozens of Czechs to the German construction company Arge Stallmann. He worked as an auxiliary worker and later as a baker. He remained in Norway until the end of the war. 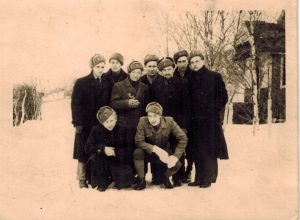 Václav Vlach (* 1921 - † 1996) was born in Dolní Rozsička. At the age of seven, he moved to Velké Meziříčí with his aunt - she and her husband adopted him. He trained in coppering and plumbing. In October 1942 he was called as many of his peers to work in the Reich. It was difficult for him to go there then, because he left his great love Anežka here. When he came home on holiday after 8 months (in September 1943), they got married.

Jaroslav Kadlec (* 1922 - † 2013) came from 12 siblings and began to learn to be a butcher. In 1943 he was called to work in the Empire. He did not get to his workplace in Harstad behind the Arctic Circle until March 1943. There he came into contact with the French and Norwegians, with whom he later corresponded. In 1944 he went home on vacation, from which he did not return. He managed to prolong his sick leave, thanks to a willing German doctor in Letovice, who was later arrested. He hid at home until the end of the war. After the war, he joined Augustin Konrád's lemonade factory in Olešnice, Moravia, as a driver.

Karel Novotný (* 1923‒ † 1971) was born in Kobylí na Moravě (Břeclav district). After training as an engineer in 1940, he was assigned from the labor office to the Reich at the age of seventeen. From 1940 to 1942 he was assigned to Funke & Co in Dresden-Freital for the construction of a motorway to Salzburg, and after six months to the Bryansk region in Russia. He was then transferred to work in central Norway for the same company in Mo and Rana. Working and living conditions were quite demanding. On December 5, 1944, he and ten Czechs fled his workplace to Sweden. According to him, the crossing in the mountains was very difficult and they suffered from hunger. In Sweden, he was employed in the Nyvogn mines. At the Czechoslovak Legion in Stockholm, he enlisted as a volunteer in the Czechoslovak foreign army in Britain. They who escaped from forced labor in Norway in a circle of friends, Sweden.
From the archives of the Karel Novotný family, Kobylí.