The National Archives of Norway in Oslo recently made archival documents from World War II available. A central file of forced deployed foreigners in Norway was found among the materials of the German occupation authorities. 1534 personal cards from the Protectorate of Bohemia and Moravia were found in the file cabinet, which register a total of 1366 persons. These were men born between 1890 and 1924. During the team's work meeting at the beginning of October in Oslo, the file was studied and the work cards of Czech workers were scanned. We would like to make the cards available on this website in the coming months. We are negotiating the permission of the National Archives in Oslo. 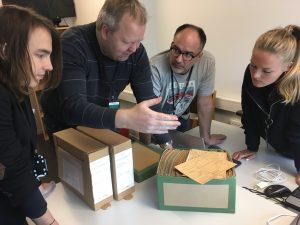